IndiMail has a feature called CHECKRECIPIENT which allows indimail to check at SMTP, if the recipient to whom the mail is being addressed exists. It is always better to reject such users at SMTP rather than later during the actual delivery to the mailbox. Due to spam, in most of the cases, the Return Path will be forged or undeliverable. Hence you will be left with a condition where plenty of bounces will be left on your system, impacting the performance of your messaging system.

CHECKRECIPIENT also causes the RCPT TO command to be delayed by 5 seconds for every non-existent recipient, to make harvesting of email addresses difficult.

If you do not have large number of users

Indimail has the ability of configuring multiple local and remote queues. A queue is a location on your hard disk where email are deposited ... 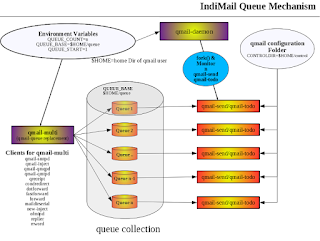